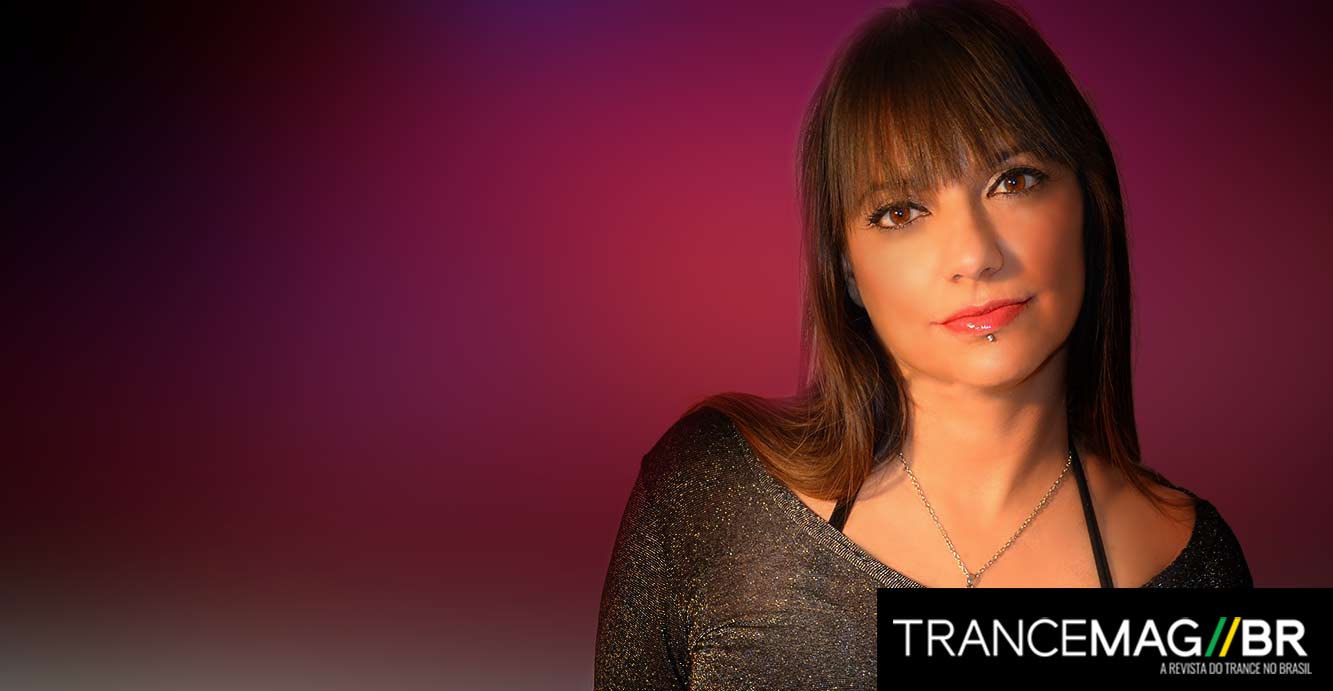 Hello Alessandra, it’s a big honor receive you on TRANCEMAG//BR.

1) Thank you for giving us this interview. When did you start listening to Trance Music, and how did you became a DJ & Producer?

Hi, hello everyone!! The pleasure is mine.
I did start on 2012 after I lost the father of my son. Trance music always helped me on life to feel better when I was down, so I felt that to focus on that to keep my mind away from sad thoughts it would have been very good and helpfull.. So to be concentrated to learn to play and to produce worked really a lot to feel good.

2) What most inspires you to make music?

I take my inspiration listening a lot of music, trance mostly, but can really be anything.

Pop music, a spot in Tv, a movie, a cartoon.. the important in trance to me are the melody and the armony. And of course a banging groove

3) You have a successful radio show called Forza, can you tell us more about the show?
To be honest I started on 2013 with my first radioshow called “Dream & Passion”, then because Im Italian, on 2016 I decided to start a new one with a italian word, and with some friends advices I decided to call it “Forza” that in Italian means “Power”. I started recording playing with my cdjs because I prefer a real  set played even if sometimes some little mistake can happen.. Then  I decided to do Forza in Live video to make it more “real” with the video record. I really dont like to do video of myself, and to play 1 hour alone recorded is not easy at all to me.. I never know where to look, record only the  audio was easier to do but I seen very good feedback for the live video so I’ll continue in this way

Its not only studio routine. Im also a mum, so I have to deal  also with what every mom does, but of course I spent all my free time in studio: listening promos, preparing my trackilsts to play during my gigs and my radio show, social media, but mostly I dedicate my time to the production:
wrinting new melodies, tracks, remix but also trying new and different techniques to continue to push my self to be better and to grow. Everyday we can learn something new and this is amazing because I never get tired to learn.

5)  If you have to pick the trance song of your life what would it be?

This is a very difficult question to me.. I love so many tracks.. I can say I have a track for any moment of my life… Buti f I have to choose, I would say “Children” By Robert Miles, because is the track that really made me discover trance music and to fell in love with it.

6)  Being a female Trance DJ, do you think this can open the doors, close the doors, or it absolutely doesn’t matter?

At first I thought it was not a difference, rather, because very few females I thought that we could have good credit producing and playing trance music, but I discovered its not. With a sad heart  I can say I encountered  bitterness, envy, bullshits and other not nice thinghs that go with a growth in this music industry, but I’ll take this in my stride and I use it  as stronger motivation to show that women are not less than men.
Maybe for what happened on the past, many ppl think women are not able to produce, but its not. If you have the passion inside and you really want to learn there is nothing that can stop this. I often feel more a man that a woman because I always loved technical and electronic stuff.. Avoiding all classic women stuffs.
Certain comments hurts, but I dedicate all my days to learn and making music so im really proud to  be where I am right now.

7) Can you tell us more about the friendship and musical collaboration between you and Darren Porter.

How did this partnership and friendship started?

He was one of the first not italian trance dj I met on 2012, my boyfriend booked him for a party and we discovered after it was his first gig.
So during the party we met him again and because he was my preferred producer on 2015 I asked in joking way If he could teach me how to make sound my tracks better. And even if I was hoping for a yes, I thought it could be impossible, but I had the big surprise he said he would have teach me the technical thinghs that  I was missing, telling me It was his way to say thank you for his first booking. Then of course our friendship bonded on the months.
Darren has been an amzing mentor to me.. He taught me over the last years a lot of thinghs and his personal techniques that helped me a lot and that I will never reveil or he will kill me

8) Many of your songs were in the Beatport top 50. The latest one was “Darren Porter & Alessandra Roncone – Transcendence” reaching the first place of the chart for some weeks.

Can you tell us more about this amazing collaboration and song?

Yes Im very happy for the results.. I got Sogno at n.2, “Four Our Angels” at n. 7, “Luce” my collaboration with the Legend “Talla “XLC at n.4, and “The Hymn” my collaboration with Allen Watts at n.11. So very good results that I can be proud of it but I always feel to say thanks for all the ppl and fans that support me and my tracks.

About the collaboration on Transcendence I remember I was listening him to play random the piano, and I heard a very beautiful melody to me, and I said to him he should make a trance track with that melody. I remember he looked at me on a weird and funny face and he said “Nooo it’s too cheesy”. Then I insisted telling that it was not.. that it was very trance, and beautiful and his answer was: “you know what? We can do a collaboration, I think you are ready for this” and I was very out of the moon for that because I could put my ideas with his ideas, and I think we did something very different and fresh.
And of course to see it after few days at number one place made me also very happy because it was my first n. 1

9)  “Alessandra Roncone – For our Angels” is one of the most beautiful productions of 2017 and it was released on FSOE Recordings.

Why the title “For our Angels” and what inspired you to produce such a beautiful Trance song?

I really have have this track in my heart… Its a track dedicated for the ppI that we love but that are not here anymore.  So (with the request also of my son) I made it for his dad,  that left us 6 years ago, but that he is always on our hearts. So “For Our Angels” is a track for him but also dedicated to all “Our Angels”

10) You have collaborated  also with, Talla 2XLC, Allen Watts, Darren Porter, Mark.L, Ciro Visone to name a few artists. Can we expect more collaborations in 2018?

Yes surely I’ll do some new collaborations even if I’ll concentrate my self mostly on Originals or maybe some Classic Remix.

11)  You have been releasing so many great stuff along the years. Most of your tracks on FSOE Recordings but also on WAO138?!, Extrema Global Music, etc to name a few.

From all your productions whats your favorite track released and why?

I can say I still like all my tracks, the track that have been the best impact is Sogno, and I love it a lot, and I also love my collaboration with Darren Porter, but for the reasons I said on question 9 my preferred is “Four Our Angels”.

12) What was your most iconic gig last years and why?

I really enjoyed to play in any gig, trance lovers are always amazing and they always left  something special in my heart. But If I have to choose which moved me more it was during FSOE night at Panama in Amsterdam. I was closing the party, stage was still full, I had many friends there and I seen some of them to cry, I played almost all time with goosebump and chills for what they were transmitting to me. It has been really amazing.

14) Except Trance what do you like to listen in electronic music or any other genre?

I like every genre that has good melodies.. as I said can be anything.. Pop music, rock, progressive, chillout, but I like a lot also hardstyle that reamind me a lot the old hard trance.

15) Which is the most important thing when you produce a trance track?

I love the melodies, I think that melodies are the most important elements on trance, but I also love the groove and the bagging styles so I like to mix this, but when I produce I let that the music guide me and I get inspiration from the sounds that I add step by step. I never start with a idea.. I just descover it doing it.

16)  Can we expect to see you soon here? 🙂 Maybe in a FSOE Brazil someday? 🙂
I really wish!! I hope the fans/promoters there can make it happen
Im really looking forward to play there.

17) You have thousands of fans in Brazil. They love you so much. Can you leave a message to them?
I didnt know to have thousand fans in Brasil.. Very happy to know it!
“Hi Brasil!! I hope you enjoyed my interview and I really hope to come there to play for you guys soon!! Thanks for the support!!” And thank you Mauro to have me on Trancemag//Br with this beautiful Interview.

Thank you for the interview!

4 years ago
A cena no BrasilEntrevistasArtistas